Integrating Buffett’s two rules of investing into the foundation of our investment strategy is something we would never regret. Buffett is not referring to market quotational losses on its stock price but the price paid on the underlying businesses relative to earnings and his timeless principle on margin of safety.

The financial market operates in cycles, and if you can keep calm when everyone else is losing their heads, you’ll beat the market. However, the art of psychological or emotional market arbitrage and catching a falling knife with our hands bears dangerously close resemblance. So how can we tell the difference to gain that investing edge?

Howard Marks, the founder of Oaktree Capital, has his own two rules for investing that could help investors avoid psychological mistakes and profit from market anomalies. Howard Mark’s often overlooked Rule No. 1 and Rule No. 2 are as important as Buffet’s. In fact, Warren Buffett has been a fan of Howard Marks: “When I see memos from Howard Marks in my mail, they’re the first thing I open and read. I always learn something.”

Rule No. 1: Most things will prove to be cyclical.
Rule No. 2: Some of the greatest opportunities for gain and loss come when other people forget Rule No. 1.
– Howard Marks

In this article, we will explore the underlying forces of the market cycles and explore the two other cycles any investor would face, as well as explore methods to interpret which stage of the cycle we are currently in.

MARKET CYCLE – The Madness Of Crowds

Bull markets are born on pessimism, grow on skepticism, mature on optimism, and die on euphoria.
– Sir John Templeton

Most investors and practitioners of value investing would be familiar with the stock markets cycles, which are said to repeat every 6-8 years. It has been 10 years since the last global financial crisis, and many have been giving doomsday warnings about markets crashing and how the 10 years relative price to earnings are at an all-time high. 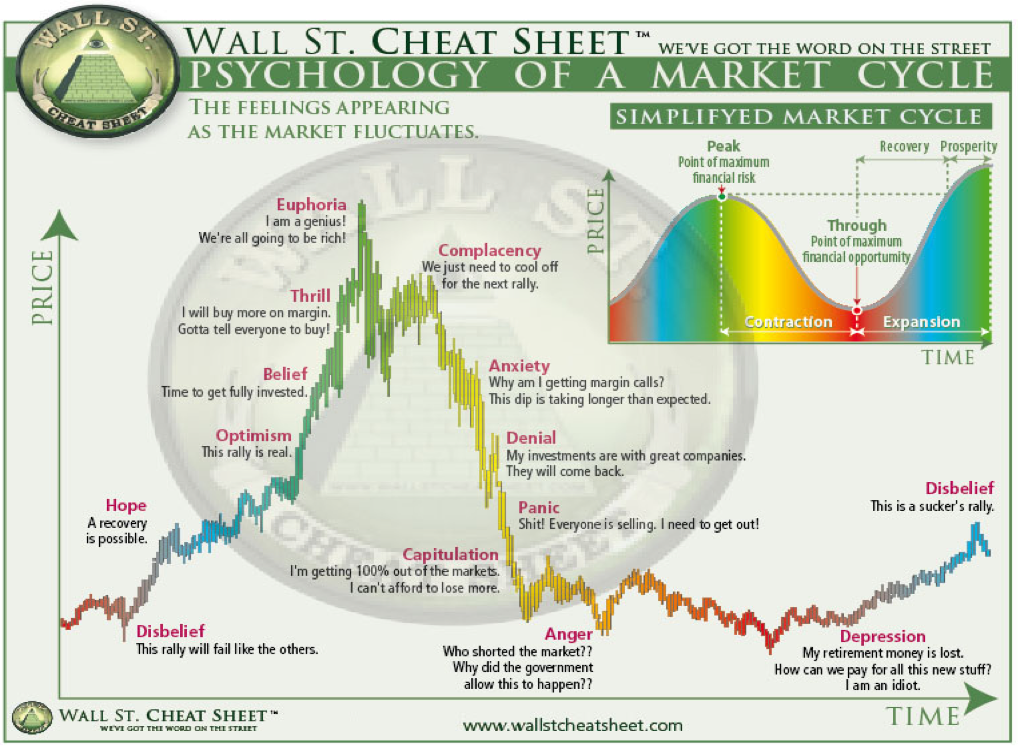 However, a stock that is at its 52 week high can be higher. We may never know if certain stocks are able to climb another 200% over the next 3 years before a market crisis occurs. What many investors fail to realize is that beneath the wave of market cycles lies the business or economic cycles.

A company’s stock price is driven by a company’s ability to grow its sales and earnings. However, many factors can dictate whether a company is successful. The economy can significantly impact a company’s financial success or failure. 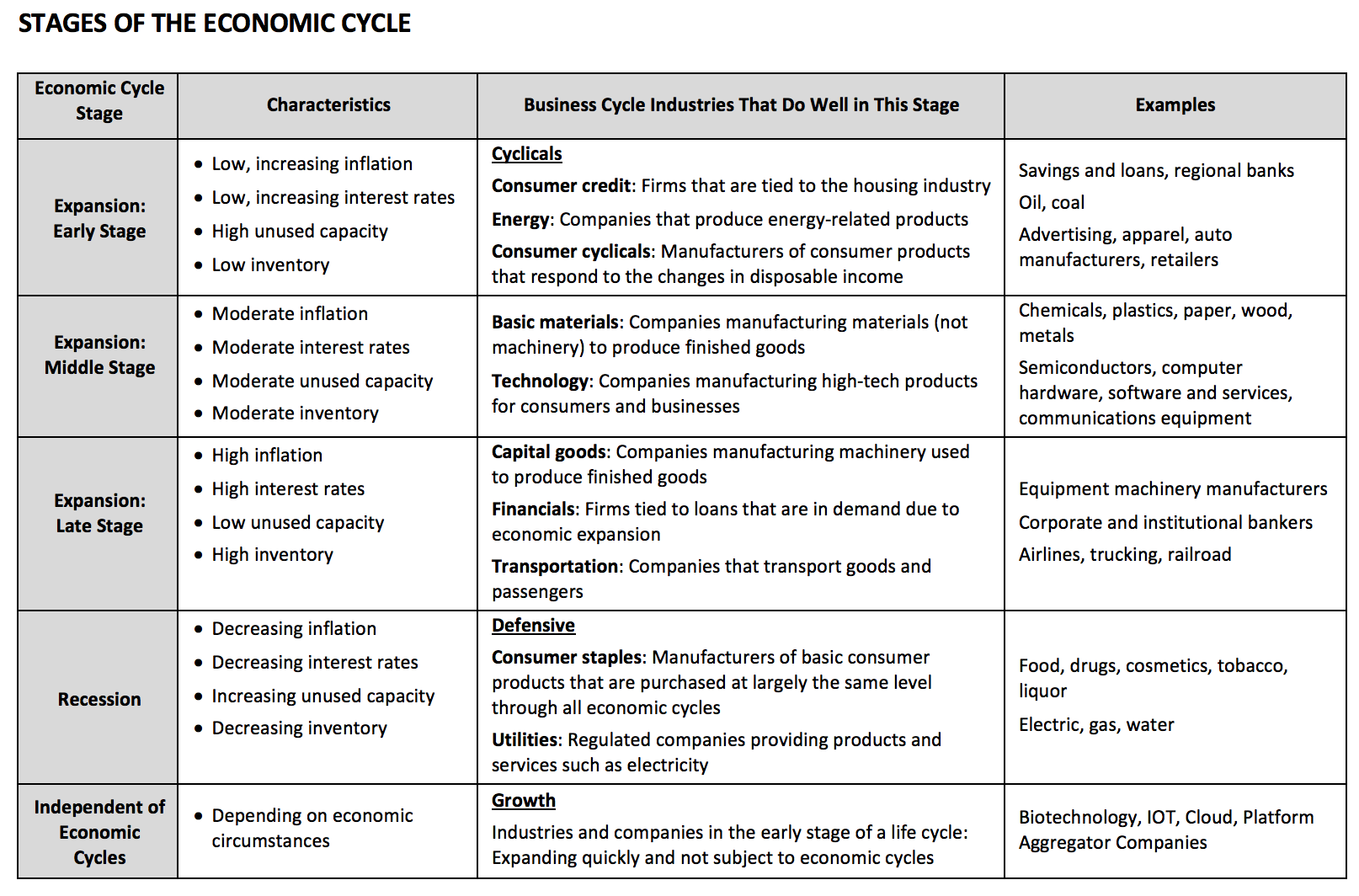 Figure 2: (Source) Modified from AAII Journal Article on Stocks and the Economic Cycle: What Performs Well and When

During its expansion stage, most businesses operate at full capacity, real GDP grows rapidly and is at the business cycle peak. As business conditions slow, economy enters a period of decline or contraction where sales of most businesses fall. The bottom of contraction brings it to the recession stage, after which economic conditions begin to improve and the economy enters expansion phase.

Investors may be able to use the economic cycle to their advantage when developing an investment plan and attempt to time it through sector rotation but beneath the wave of business and economic cycles still lies the credit cycles.

Sir John Templeton famously once quoted “Bull markets are born on pessimism, grow on skepticism, mature on optimism, and die on euphoria,” on the nature of equity markets. Since the underlying principle is the human psychology, it is therefore not surprising that credit cycles which affect businesses,  and market cycles follow this pattern. 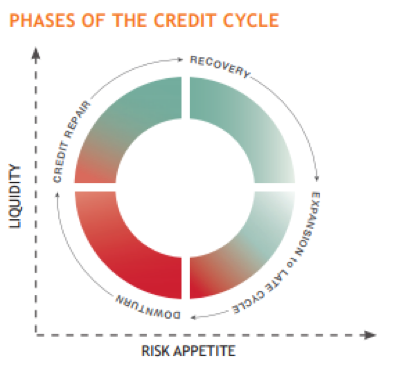 To be good at equities analysis, we need to understand credit cycles. It is no strange coincidence that two legendary investors of our time recently launched two similar books.

Credit cycles and business cycles are related, but one does not drive the other. The availability of credit affects the ability of a business for inorganic growth, or perilously for some companies, the survival to fund working capital. All these trickles down and hence affect the financial markets and its underlying stock prices. There are typically 4 phases of Credit Cycles:

In the book “Reminiscence of a stock operator”, Jesse Livermore, who was considered one of the greatest traders of his time, got his sense of the market cycles from credit cycles when he enquired for loans for his leveraged speculations.

When Jesse made frequent enquiries to banks for large short-termed loans, the usual reply given his status is “No problem. We have very low rates”. As the market started to overheat, banks soon  told him that they would “Need collateral. And rates are rising fast.”

At the final moments of the stock market crash of 1929 and with credit liquidity at its tightest, the bank’s reply to his loan enquiry was “Yes at 10+% interest, and only if you deposit $1m in our bank first”. The table below shows how the various attributes are affected at different stages of the credit cycle. 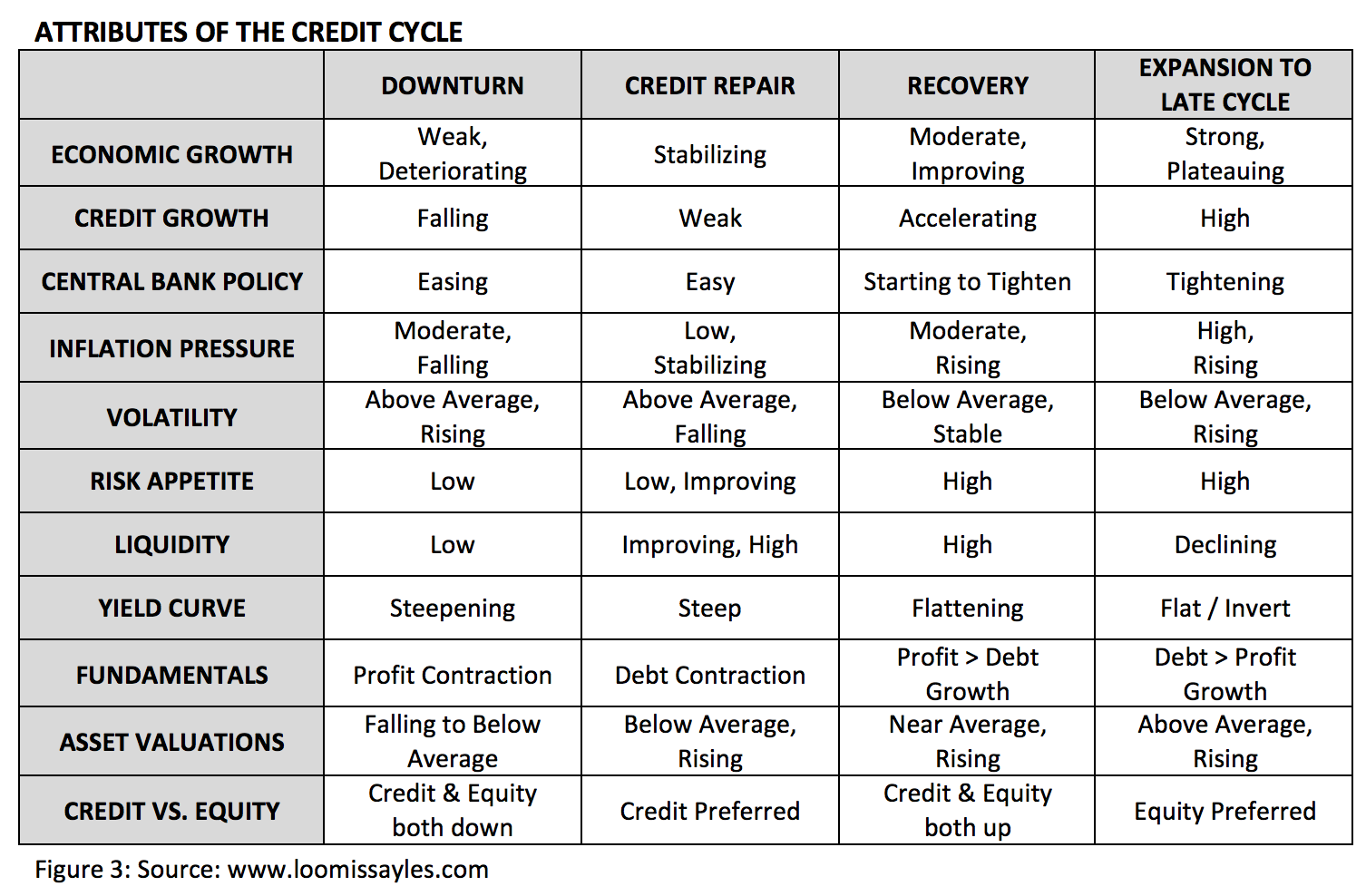 While not everyone may have the privileged access to private bankers,  nor are able to enquire about business loans in a bid to use Jesse’s method, given all the above information, where do we currently reside in the credit cycle and are there signs which can give us an indication?

One of the indicators commonly used is the yield curve for government bonds. The yield curve captures the perceived risks between bond yields and its maturity. For example, the U.S. Treasury Department issues bonds with maturities ranging from 1 month to 30 years. As bonds with longer maturities carry higher risk due to a longer period of uncertainty, investors will require higher yields than bonds with shorter maturities. 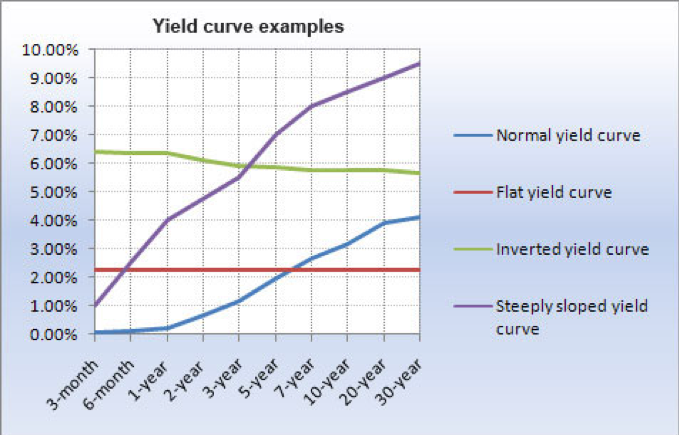 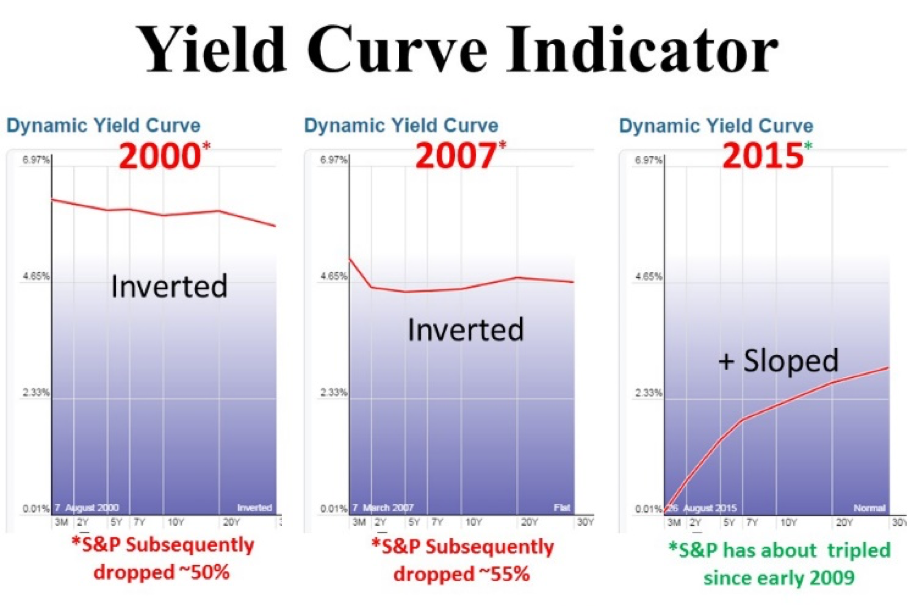 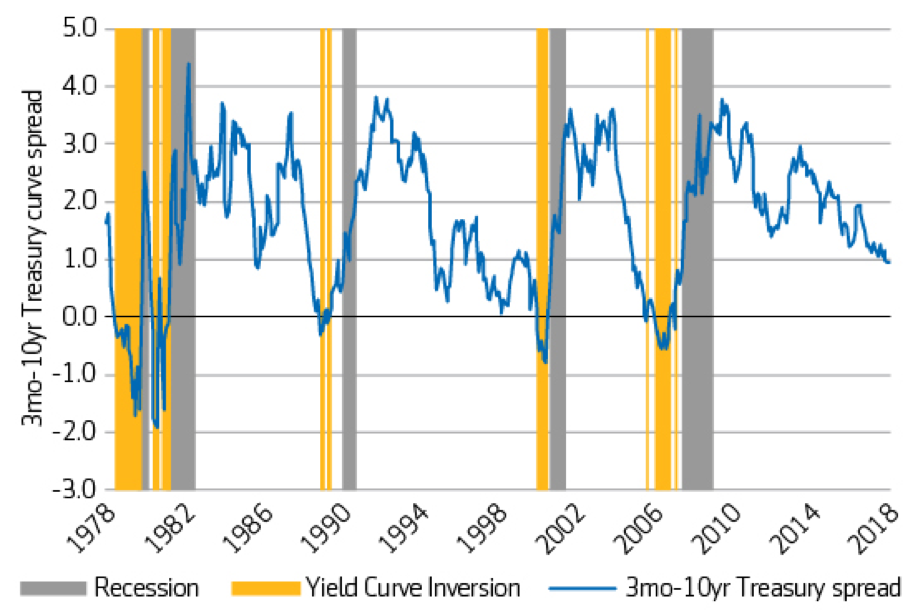 How Does the Fed Funds Rate Affect Treasury Bills?

To understand how the yield curve works, we would need to understand these three terms: Federal Open Market Committee (FOMC), Federal funds rate, Treasury bill yields and how the shortest-term treasury bills is influenced by monetary policy.

The Federal Open Market Committee (FOMC) sets a target for the federal funds rate (the overnight rate at which banks trade funds parked with the Federal Reserve) depending on how much money they want in circulation. The federal funds rate is then the main point of reference for various short-term interest rates including the rate on treasury bills.

Treasury bills are like short-termed government bonds issued by a national government to investors to raise money to cover the shortfall between what they want to spend and the government’s income from things such as taxes each year. Some governments issue bonds and raise cash to meet banks’ needs for a risk-free asset.

Yields on the Treasury bills, or short-term government bonds, are much more sensitive to the forces of supply and demand depending on whether the Treasury Department is issuing more or fewer bills than investors want. Federal Reserve lowers the fed funds rate when economic growth slows.

So why does the yield curve invert? 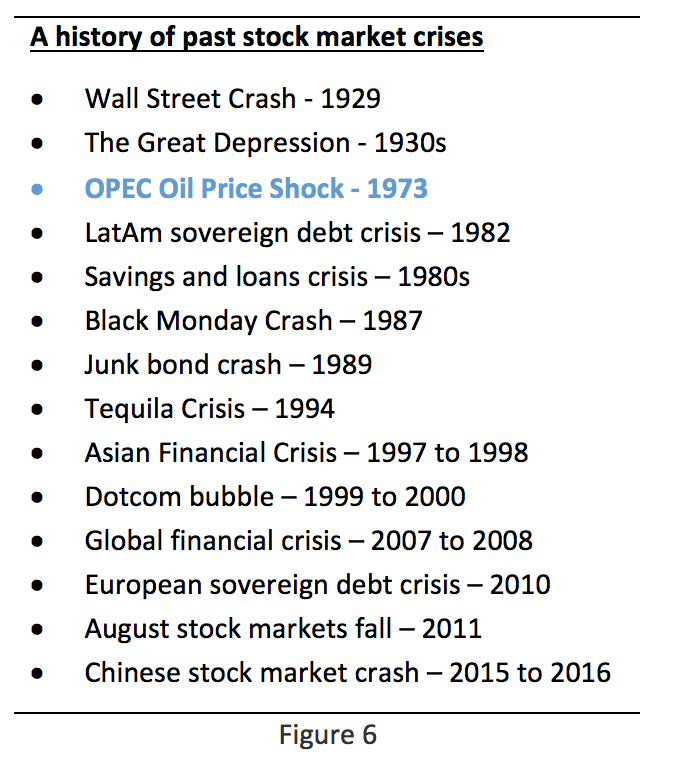 How is the yield curve helpful?

Historically, economic recessions occurs AFTER periods of inverted yield curves, shown by figure 7:  the grey bars indicating the past U.S. recessions since 1967 occurred after the spread went below 0. When we plot the difference between a 10-year yield and the 3-month yield over time (as shown in figure 8), a spread less than zero indicates an inverted yield curve. 6 months to 1 year before every recession since the 1967s was preceded by a negative yield curve.

According to research from San Francisco Fed, every recession of the past 60 years was warned by an inverted yield curve with only one false positive in the mid-1960s, where it was not an official recession but an economic slowdown. 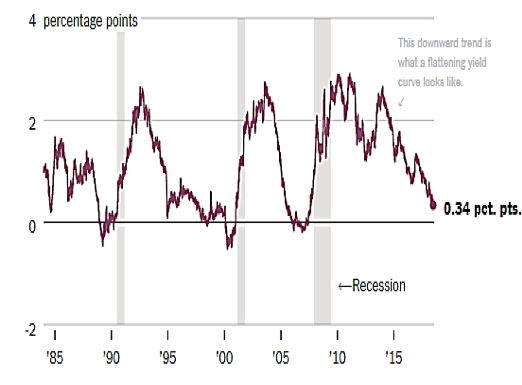 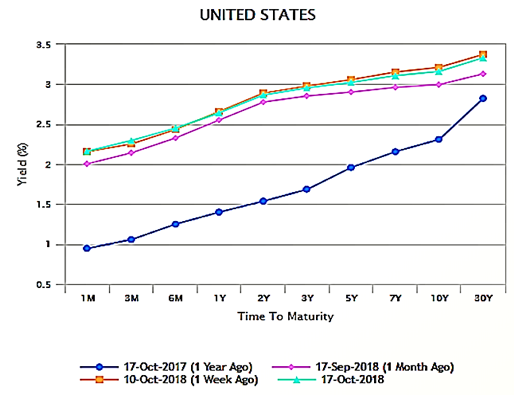 As of recent months, we can see that the spread between 10-year yield and 2-year US Treasury Yield curve is trending closer to, but yet to hit zero. However, it is yet to flatten out or begin to invert. Not every market crash is due to credit cycles and financial events. Some are driven by black swan events like the anticipated Trump’s trade war with China or supply & demand situations like the 1973 oil crisis which resulted from a US oil embargo by the OPEC.

However, most of the world’s stock market crashes were due to the credit cycles (the tightening and loosening of credit). While no one has a crystal ball predicting the future (let me know if you do), it would prove rewarding to understand the undercurrents of the market cycles. At the Hidden Champions Fund, we are vigorously preparing our target boards and are very careful of the price we pay on the Hidden Champion type companies we identify.