What a roller coaster year it has been, and it is only the beginning!

Markets have been rising until recently. Valuations seemed like shifting goalposts when it came to certain segments of the technology sector. Prices of cryptocurrencies (such as Bitcoin) moved based on the tweets of prominent personalities such as Elon Musk. During the COVID-19 period, glove companies in Malaysia rose to become the stock darlings and hit new highs. Before you know it, the share prices of glove companies had a correction despite the companies being set for record profits for the next couple of years.

While many people have suffered during the pandemic, there are some who have benefitted. People who took the opportunity to enter the markets during the early days of the pandemic would have benefited in general. The lucky ones who have managed to maintain their income or even had it boosted will likely have saved money to be used for the recovery consumption. While general consumption has dropped during the pandemic, discretionary spending is poised to rebound. Hospitality and tourism businesses in turn are in a good position to benefit strongly once vaccines start to be disseminated to the population (which admittedly would take a few years to complete). At the same time, there is a trend that businesses, in the interest of reducing costs, are looking to cut down on office space and travel as the general workforce has embraced teleconference as an effective way to communicate and get work done across the country boundaries. More efficient work practices will lead to greater productivity, laying a good foundation for future growth.

Even nature has been volatile. There has been a cold blast in the Central United States, turning the lives of American households and businesses upside down by creating an energy crisis, particularly in the State of Texas, as the demand for power surged as they struggle to keep warm, overwhelming the existing power grid. In an attempt to provide an explanation for the struggle in keeping up with the demand, some have started to point the finger to the green transition to wind power, as many turbines have stopped spinning as they froze. However, there must be an issue in the energy policy in Texas, considering that Texas is one of the southern-most states in US and the other states nearer to the Arctic did not suffer as bad a fate.

Amidst these dramas, the wisdom of Warren Buffett and Charlie Munger continues to serve as a reminder and logical framework of how we should think about the markets and specific businesses. The market prices merely serve as a barometer of market sentiments and the analogy of “Mr. Market” of Benjamin Graham serves to illustrate just how emotional and volatile the markets can be.

Keeping one’s mind in a good state is crucial to navigating volatile markets. All these issues tend to be temporary albeit serious, but they will soon pass and even be replaced by others. Balance is typically taken for granted until it is not. Let us not be euphoric as we make plenty in the stock markets neither be depressed when the inevitable correction (nope, I do not know when) comes.

PS: Starting this issue, we will be publishing our Newsletter during the first week of the odd months because of the general practice of closing financials by month-end for practically all companies.

3 of the Most Interesting Things That We Have Read 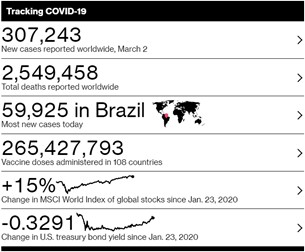 There are hopeful signs about managing the pandemic from the U.S.. As of the end of February, President Joe Biden has reached the halfway mark of his goal of 100 million doses of vaccine shots, in the 37 days since he took office. This comes just after the grim milestone of half a million deaths from COVID in the US alone, and global fatalities exceeding 2.5 million.

At the current rate of vaccination, more than 75% of the U.S. population will be inoculated by Oct 21,  and on a global level, it will take 5.4 years. At the coalface of the pandemic, lockdowns are still being introduced, or extended, around the world to restrain the spread of the virus.

For good news on the vaccine front, Bloomberg reported that public health experts think immunizations could end the global coronavirus pandemic due to the effectiveness of vaccines. A study done in Israel on 1.2 million people in Israel found that the shot was 92% effective at preventing severe Covid cases after two doses and 62% after one, and even reduced transmission by 89% and its estimated effectiveness for preventing death was 72% for up to three weeks after the first shot. This is the largest study on vaccine efficacy in a real-world environment, and such results give hope to us that the pandemic can finally be managed, and we might be able to live “normally” again.

However, there is a highly transmissible COVID-19 variant that originally emerged in Brazil, and has now been found in at least 20 countries. It was observed that this variant can re-infect people who previously recovered from the disease. Currently, researchers are monitoring whether the new variants could reduce vaccine efficacy.

With this in mind, we are continuing to monitor the situation carefully; the very last thing we want is to have a vaccine-resistant COVID variant that will send the whole world into another lockdown, negatively impacting everyone’s lives and livelihoods. 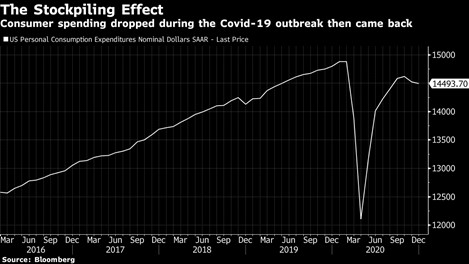 The semiconductor industry is notoriously cyclical; semiconductor manufacturing companies are subject to the ups and downs of regular chip cycles, which are tied to the law of supply and demand. When there is a big increase in demand for goods requiring chips, chipmakers have trouble keeping up with demand. But when supply exceeds demand — either through overproduction or a pullback in end markets — prices fall. In turn, so do chip manufacturing levels.

With the lockdowns implemented due to Covid-19, one of the most unusual things about it is that it came with much stronger-than-expected consumer spending.

You might recall the long lines you faced in our local supermarkets all around the world when the lockdowns were announced, as people stockpiled things like toilet paper, face masks, and food, the basic necessities for survival. When it became clear that COVID would be around for a while and as companies adapted to working from home, we started to shift towards purchasing items for the prolonged stay at home. Computers were purchased for work from home or for kids to attend school virtually, while others spent on big-ticket items like a big screen TV or better furniture, of which monies would otherwise be spent on dining out or vacations.

This sudden increase in demand for goods surprised manufacturers to the point where various manufacturers ranging from personal computers, tablets, smartphones, televisions, home appliances, automobiles, and other gadgets are scrambling to secure enough microchips for their devices, leading to a global chip shortage. Looking back at the start of the coronavirus crisis, it was not obvious that it would result in a spending spree as people reoriented their lifestyles from going out to staying in.

This V Shape recovery for consumer spending caught us by surprise, especially so in electronics, which increased TSMC operating profit by 50% in FY2020 and tripled their share price! 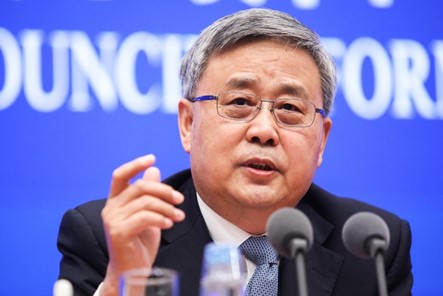 China’s top banking regulator, Guo Shuqing, also the chairman of the China Banking and Insurance Regulatory Commission, recently stated that he is “very worried” about risks emerging from bubbles in global financial markets and the nation’s property sector, bringing about fresh concerns of tightening in the world’s second-biggest economy.

The impact on the Chinese stocks was immediate: the CSI 300 Index fell as much as 2.1% amidst the declines in Asia, while Kweichow Moutai Co., the biggest contributor to gains during 2020’s stimulus cycle, fell by almost 5%, or more than $100 billion in nine days.

We are just starting to feel the “side effects” of aggressive economic stimulus policies in the United States and other developed countries in the US stock market. We have seen the extra liquidity in US and European financial markets from stimulus measures pushing asset valuations above levels justified by economic fundamentals, and this continuous disconnect between the rallies in US and European markets and their underlying economies could seethe bubble bursting once sentiments start to reverse. 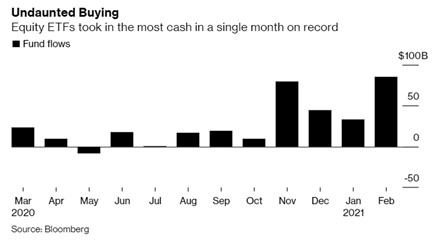 This was especially so when we saw the optimism from investors in the month of February. When faced with a slight spike in Treasury yields coupled with a tech sector pullback that erased $1 trillion from stock prices, exchange-traded fund investors decided to pour more money into US equities. The striking figure underscores investors’ unflinching bullish sentiments amid prospects for additional fiscal stimulus and the Covid-19 vaccine rollout, alongside the continued support from the Federal Reserve. At least for now,  these inflows will overshadow the concerns on already elevated equity valuations from Guo.

Corrections are healthy for the markets to remind long-term investors of how even though markets may get ahead of themselves, fundamentals of companies and paying the right value for them still holds true. We will be looking out for opportunities in this downturn to load up on our higher conviction positions when the opportunity arises.